Just a handy tip for this week's blog post....

This is how I store my drill bits (and their collets).  They aren't tall and so they go in a drawer along with my three different size hand drills.


Posted by burygardeners at 18:52 No comments:

Email ThisBlogThis!Share to TwitterShare to FacebookShare to Pinterest
Labels: Information

I have bought another project.  If you want to take a look I have started the blog for it; just click here: Parkside
Posted by burygardeners at 18:45 2 comments:

I had a bit if a whinge about the kit in my previous post, so I may as well continue here.

There is a good reason to do this - please take it as a reminder that if you want utter realism and you are a perfectionist then a kit build is almost definitely not for you.  Different makers will vary in quality but even within one maker the houses will vary and I am sure they will all fall short of perfect.  That said - try to assess how fussy you will be and then if you are in the fussy bracket, be very careful choosing your house.

Just today, with all the house front done, I suddenly noticed that that the steps up to the door looked more like a staircase rather than the usual few steps.  So, already a bit peeved, I then spotted they consisted of treads just half an inch wide. If you translate this to real world, we would have steps with a six inch tread.  Believe me you will struggle to ascend them and its sideways only and with care when coming down!!!!

I finally figured what the overall problem was with the basic design .... the exterior pavement/basement isn't deep enough - so we have the issue of not having enough height to get into the house from the area and having to have a staircase rather than a couple of steps to enable us to get into the house.  If they had made the stairs a reasonable depth they would have come all the way to the front edge of the entrance wall which clearly wouldn't do.  The only option is the one taken, they have squeezed in a steep climb over a short depth and so very narrow treads.  Hey ho, let's try hold the thought that dollhousing is all about illusion.  It is miniatures that are about realism.


The railings also left something to be desired.  The ones on the right edge were too long and I spent ages drilling into the post to take the excess horizontal bars rather than cut them shorter.  My thinking was this might be a good idea to give the whole run added support.  I then went to the left hand side and, guess what, they just touch the post (this is an OK thing) so no drilling was needed on this side.  Now I wanted the sides to match.  Back to the right and trim those to fit and turn the post so the drilled holes go to the back.  Left and right ends now mach and are sort of sorted.


As for the railings at the front and centre on both sides of the stairs, there is a big gap and there is nothing I can do about this.  W...e....l...l there is actually.... further down the line I think I may have nice metal ones made by The Iron Works and Black Country Miniatures.

I repeat - do not let this complaining put you off DHD kits - they are nice designs, good sizes, good value for money and for any normal person would be just brilliant.  I just find that with every build I do I get pickier and pickier.

Since writing this DHD are now using a laser cutter and have whacked out a lot of nice and also fairly unusual houses; even Dalton House has been tweaked.  So please interpret this post as being more about deciding what level of perfection you want to work at before buying a house rather than it being a moan about a particular vendor.

Posted by burygardeners at 18:46 4 comments:

Email ThisBlogThis!Share to TwitterShare to FacebookShare to Pinterest
Labels: Front of house, Information, The Build

Purchases from the York Show

I have no idea why I didn't do very well at the York Show; maybe it was because I went with such a long and definite list of things I need/want and I kept trying to find those instead of just freewheeling and picking up things I liked and could use.  It just felt like there was nothing there for me.  Now if you take 81 vendors and multiply that up by the hundreds of different items they sell it probably means I rejected something like fifty thousand items.... there is picky and then there is super picky!


I am struggling to find picture frames I like.  In the main they are usually too clunky or ornate.  I decided I would get some modern/plain picture frames for most of the pictures.

I have the advantage of working on a Georgian house, but set in 2016 so there is no need to go the whole Georgian hog.  These look as though they will do fine when painted or gilded.  Now I just need to figure out 1/12th mount-board - suppose any thin card will do and should I glaze the print as they would be in real life?  Think Ikea.....rather than fine art.


I was so glad to have found these roundels as I already have six of them and needed eight and couldn't for the life of me recall where I got the originals.  My foolproof method of photographing purchases and adding them to an album with the name of the vendor proved fruitless as I had obviously forgotten where I got the previous ones at the point that I did that.


I struggle with lights on every project - bit like lunch most days - no idea what I want and just wish someone had invented a new 'animal'.  I do know I don't want most of the lights you see out there.  I have had Ray Storey lights and I do have one on this project but even they are not always what I want for a particular place and any way he wasn't at the show.  I loved Small World Product's lights but Sherrie has stopped doing them, so who now?  Weary brained as well as weary of feet I succumbed to the usual creatures just so I can get up to the next floor of the house.  There was an upside to this... these wall candles come in two versions and the other one is in the chunky-munky scale - basically anything I consider too hefty to be correct.  Luckily at the show Matlock had both so I was able to compare them and choose the finer one of the two.  I am not over fond of the wall plate but it will do.  I have a pair for either side of something somewhere

I have one of these grates (in kit form) from Phoenix and needed another so I treated myself to one made up by Newtonwood miniatures.  It has a lovely finish; I only hope I can do as well with mine otherwise it will stick out like a sore thumb.  Mine is for the dining room - pretty much concealed by table and chairs (!) and this one is for the music room where it will be very visible, so it made some sort of sense.


This is the light I settled on for the sitting room so I can make some progress.

I am going to have a much worse time on the next floor level as there probably won't be any ceiling lights.  It is the formal Georgian part of the house and in real eighteenth century life low ceilings like the ones I have would not have had chandeliers for the obvious reason - too many candles too near a ceiling would be a fire waiting to happen but they still had to be above people's heads.  Even then there were reports of hair catching fire when the ridiculous high french wigs came into fashion. 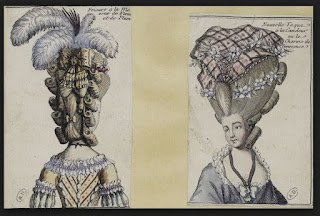 Chandeliers were for the largest and grandest of public rooms; most rooms were lit (as the Americans still do) in various areas as needed.  A candle here and there for reading or sewing.  This Georgian house might well be a grade two listed and you wouldn't be allowed to add ceiling lights.  Let's see if I fudge that when I get to that level.

Another of my hunts was for mirrors and pictures and I was unsuccessful on both counts.  I did buy these from Tee Pee Crafts as they weren't too chunky.  They are made of metal with nice detail and a reasonable old gold colour.  Right now all three are intended to be used as mirrors.  At £2.95 each I thought they were great value.

So endeth my purchases for this show.

My next one may not be until Stafford on 4th September.  Shows slow down in the Summer to some extent.  I am also currently enchanted by a new grandchild so time has to be shared out carefully.

Posted by burygardeners at 15:47 3 comments:

Have written about the York Show in my Shows blog:  Dollshouse Trips and Shows.

When you visit this Saturday's post (11th June) I'll show you what I bought.  Don't get excited it is just half a dozen things and not one of them exciting.... one sad shopper.....
Posted by burygardeners at 14:09 No comments:

Tah Dah....... here is the house front pretty much finished.  Windows to glaze but don't want to do that when there is interior decorating to do. 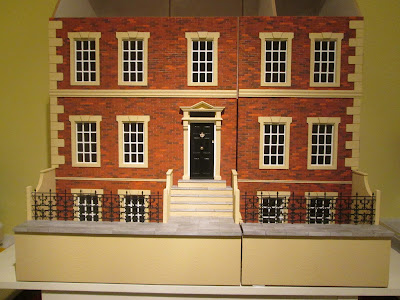 sort of based on 38 Queens Square, Bristol 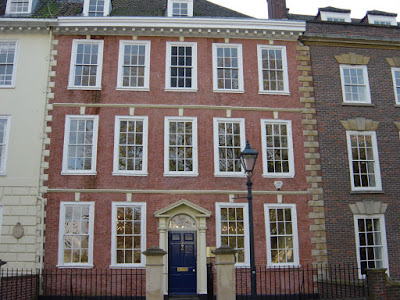 This is the back of the door at the basement level showing the bogey hole under the stairs.  The windows are just rough first coated in this picture and not stuck in place.

Finally a glimpse through the front door to future possibilities - love the trompe l'oeil photo giving the building depth. 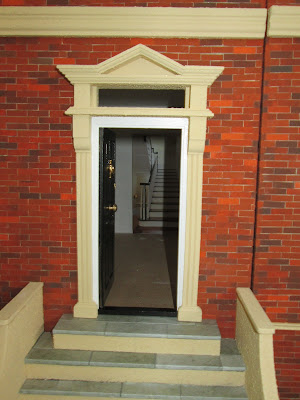 Posted by burygardeners at 17:43 6 comments: