Just a couple of notes

While posting this I am hoping it will serve as a record in years to come of the time that my three year old grandson became fascinated with miniatures. None of my family has the slightest interest but the joy of having a toddler around is that they are interested in EVERYTHING.  He loves nanny's little house even though he isn't allowed to play with it, so I decided to buy him this for his birthday:


For under twenty-five pounds I thought it was absolutely brilliant with enough detail but still able to be played with easily.  Everything you see was in there - other than the cat which I added. Cupboard doors and drawers open, cushions come off, bedding etc is all loose, the figures' arms and legs can be bent........   I am having so much fun....... ahhh, no, what I meant to say was .......  he is having so much fun.


You may have forgotten by now I made an ELF media centre for the TV for the student apartment but then decided I wanted legs.  Elizabeth-the-fab-one duly sent me a pre-drilled plinth (?) and four dinky legs.


Just two coats of paint and a bit of glue and they were attached..... but.... because of wretched skirting boards (just like real life) the base does not sit against the wall and so the top appears to be floating in space somehow - I know that even in real life it would be attached to the wall but it does look odd to me.

So, I levered off the top of the unit and re-glued it with the overhang that was once at the front of the piece, now at the back 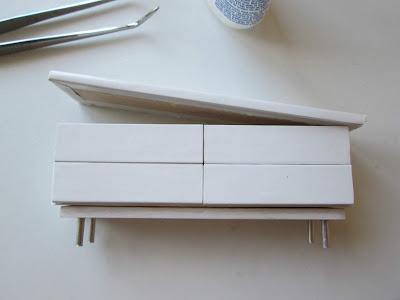 All lined up and sitting better.  The TV was super-glued on to the wall unit and then the complete thing was tacky-waxed in place.  The gap is now credible somehow and any way, it is hidden by a large yellow chair. 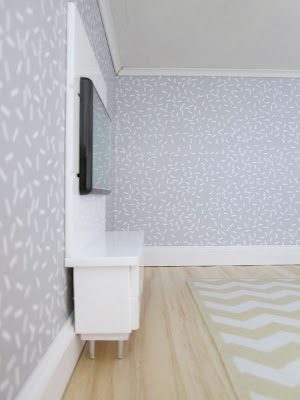 This is how the room currently looks - waiting for its ceiling light and for the lamp to be plugged in and a big green plant in the far corner and, and, and, and...... For Mothers Day, now long since gone, I had these little gems from Handmade Miniatures by Alma.  Her site is closed right now but hopefully she will return.  I am just so happy I ordered when I did.


When I tell you that the spaghetti packet is a scant one inch and the printed label is even printed on the back, you will understand why I am in awe of her perfect scale.  The spice rack is just a dream - I have no idea what she fills the little jars with but the colours and textures are perfect.  The pink milk, also in glass, is so pretty and will make a lovely yogurt drink for my French student who is a bit of a foody I think. 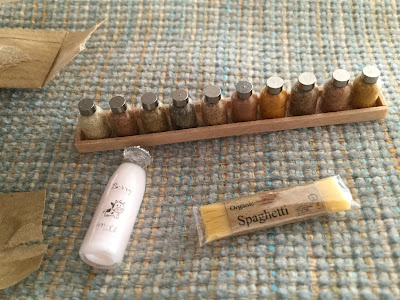 I may be somewhere else....

Just to keep my hand in I thought I would drop you a line....

I am currently trying to fit in adding to our brand new (builders' site) garden so I am blogging over there for a while.  Dalton House is not dead in the water I promise I just seem to have been utterly engaged in this Scottish move process for a very long time and, now, being with the family here a lot.  All very lovely but I don't get those long tracts of 'boredom' time which Dalton House so thoroughly filled.

It did occur to me when scribbling in my garden diary/blog you may not know where else to find me.  If that's the case just click here and there is a looooooong list.

All My Blogs
Posted by burygardeners at 17:50 4 comments: