One step short of a flight

I don't know what it is that I am not seeing/understanding but for me the front door on this house seems to be floating above the steps and looks like it needs another one.

I only had some interior stairs and they weren't wide enough.  I decided to glue three together and then trim them to fit but after gluing two together I thought I liked the look of the top step being different so I've left it at that.


It needed a bit cut off the back to get the depth right so using the above gear I clamped it to my bench and cut a little each day when I came into the hive.  You will gather the combination of that saw and my muscle didn't make a lot of impact on the thick step.  On day three my other half came into the hive with a cuppa for me.  I told him that by day three I had done about a quarter of the length, so he 'just finished it' on the way past!  There are days I wish I was Popeye.  More spinach anyone?

Here it is in situ - it just reaches the bottom of the door opening so now my little folk can step right out onto a step and not a drop.


While I was messing around with all of that I realised just how much of the brickwork would be covered by chunks of basement.  I have again switched from the notion of bricking the whole front and then sticking on trims and basement to applying trims and working round where the basement will go.  I drew around all the areas that would be covered with steps and walls and basement floors.  I intend to brick close to these lines but then stick on the basement pieces (and pin them in place) and then finish off the bricks up to the edges of any added structures.  I hope that it means there will be lot of bricks and time saved.

Posted by burygardeners at 18:14 4 comments:

Email ThisBlogThis!Share to TwitterShare to FacebookShare to Pinterest
Labels: The Build

I have another huge favourite vendor called Delph Miniatures.  This is a mother and daughter team who can make just about anything 'modern' you might need.  A couple of her makes have been fish and chip shop fryers in two scales! and a mortuary fridge complete with body.  The creations are truly in the realms of, if you can think it Kath can make it.

I once asked her to make me a Yale lock and she did - I have just bought another for this project.  She also works in spot on 1/12th scale 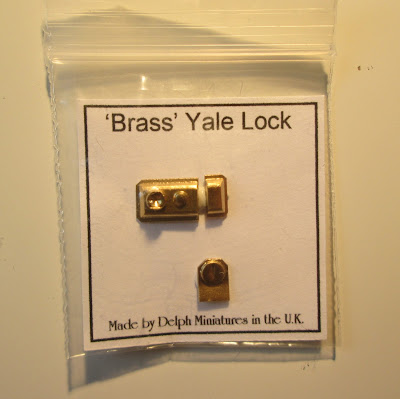 Kath (and Margaret) makes and sells single and double wall sockets waiting to be used around the house.  I believe she also makes the old brown Bakerlite type of electrical sockets used in houses well into the early sixties in this country. 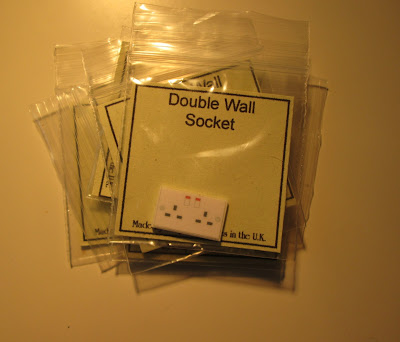 There are a number of appliances you can buy already plugged in. 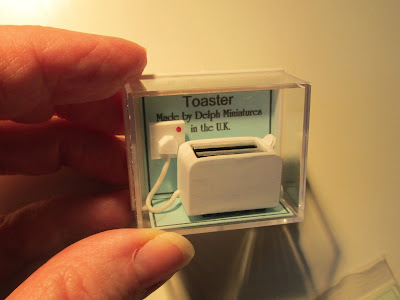 So most electrical things that you don't want to light up are well covered by what she does.

However, I have a couple of table lamps and standard lamps which, in real life, would be plugged in.  I then needed to connect the wire to the electrical source so the lamps could be lit.  I couldn't see a sensible reason for traveling wires here and there and then having to conceal the fact that they weren't actually plugged in.

I came up with the wheeze of  getting some plugs in sockets from her and drilling below the plug and passing the wire through and then through the usual hole in the wall and on to the power source.  Within a couple of days here they are and pre-drilled by Kath all ready for me to use.  (The following pictures are a trial run mock up so not too elegant but will show you what I mean) 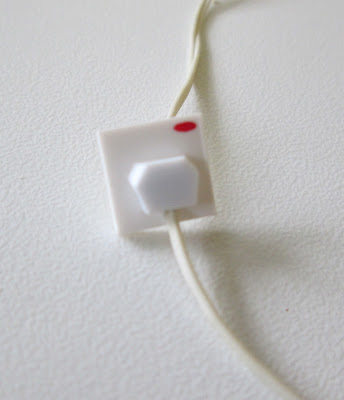 
The wire is then threaded through the hole in the room wall - this is just a bit of scrap wood not the real thing.
Pull gently into place and glue

There we have it a realistic lamp plugged into a realistic socket and will also light up!  I am sooooo happy.  Huge thanks Kath.

Contact her if you want any (or anything else).  Failing that I do urge you to check out her site and see the goodies she has.  She will be at the NEC Miniatura in April - I have my shopping list ready.

Posted by burygardeners at 15:03 6 comments:

Here comes what must be one of my top three vendors.... ELF Miniatures

If you look at the site it is described as modern miniatures and, yes, it is that in bucket loads.  This in itself is a rarity, BUT with a little imagination her flat pack kits can be tweaked and twiddled into a lot of other things - such as a Georgian linen press and a 19th century floor to ceiling cupboard in a shop - both of which I have used ELF for.

As I said the items are in flat pack kit form, BUT Elizabeth will make up things for you if required.  She also designs and cuts bespoke items - basically if you can dream it, she can produce it.  I think her prices belie the amount of work and time she commits to any project - in other words she is affordable.

Within a couple of days of sending a vague email about what I thought I wanted she had sent me not one but three design suggestions for my mud room.  I selected this one. 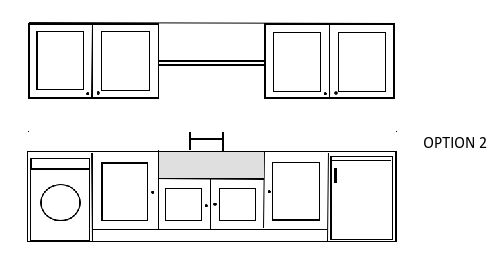 This room sits between the Hive (hobby room) and the children's Rec room.  Backed on to this room behind its back wall (invisible to us of course)  is the family's laundry with washer and dryer and linen storage.  This mud room is for anyone in the basement to make a cuppa or even a 'snack'.  It has a fridge and will have kettle and toaster.  This is to save kids and their friends trekking upstairs to the kitchen. It also has a washing machine and a very large sink for washing dirty stuff that they don't want to put in the laundry room washer.  Such things as muddy sports clothes, riding stuff etc can be washed here and the huge sink is terrific for muddy wellies football boots and the like.  It also sees its fair share of BBQ grill racks, plant pots and the like.  It is decidedly a mud room, not a utility room.

Here are the components needed to make the plan live:

Pass me a hod

Here are the versi bricks and slates I told you about earlier.

I don't tend to use paper for walls or floors though I have seen it done well.  With that in mind I thought I would consider this for the pavement and the areas (outside space) in the basement.  Very good quality - quite heavy and nicely matt.  I am tempted to cut up each paver though and stick in place?????

Here's the link:  Richard Stacey
Posted by burygardeners at 17:46 6 comments: