Well the 'bit of a breather' (my previous post) seemed to turn into five months but here I am again, hopefully, back in the game.

Part of the procrastination, on the days when I could have cracked on with my project, is that I have reached the 'doing the windows' stage which I always find pretty tedious.  We all have our mini bete noires. .  I have made it even more difficult for myself by deciding to add another dimension to the, already boring, window chore by trying to make them into a more realistic version of sash windows.  This involves adding fifteen pieces of fiddly wood to each of sixteen windows.   Two hundred and forty bits of wood to be carefully measured, cut, some ends shaped, lined up and glued in place..... over the glazing!  Maybe if I stopped doing the maths and just cracked on with it, it would seem less daunting.

The other challenge I have given myself is making roller blinds for these sixteen windows.  Mostly their ends and tops will be hidden by curtain or pelmets so can be simple rod and roll of fabric.

My real life house has ivory blinds (different fabrics) in every single window and we don't, in fact, draw any curtains in the evening - we just roll down the blinds.  They are all one colour because I like the idea of 'uniformity' when viewed from the outside.  A tad OCD probably, especially as I roll then up completely when open and they are never seen from the outside in the daytime.  Generally the fixing part (each end) is hidden by a curtain and they all fit inside the window rebate. 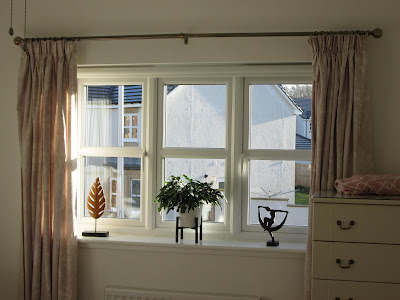 The bathroom, kitchen and workroom ones don't have curtains softening their impact and the blinds can be seen ...fixings and all. 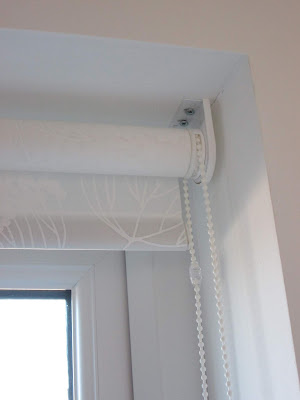 In Dalton House my three apartment windows are pokey and shoved in dormers in a roof and they won't take curtains very easily.  The four basement windows are in my workroom, a mud room and the childrens rec room; so none of those require any curtains either.  This gives me seven windows where the ends and tops of the blinds will not be hidden by curtains or pelmets, so they need to look a bit more realistic than a roll of fabric on a stick - why, you might ask...... and how wise you are.  Off I went on trying to make realistic-looking roller blinds.

Here's how I did it.  If you are as mad as me, enjoy ...... otherwise just skip to the finished picture and I will see you again when seven of these have been made and fitted to their windows.  It might be a while.....hopefully not five months.

Rods
The rods are cut from bamboo skewers.  I discovered they are a pig to cut.  Knife and fine saw worked but not easily then, guess what, I discovered I could cut them with large scissors.😂  Tidy up the ends with sanding and paint just the ends white.  I forgot this and had to do it when I had finished the whole thing.  Make them a tad wider than the finished blind will be as you should be able to glimpse a bit of them between fabric and bracket.

The Fabric
Measure your windows and cut the fabric slightly larger than you are going to need.  I wanted my finished blind to have an eighth of an inch overlap each side of the window: scaled up that would be only be about one and a half inches in real life so you could be a bit more generous with that .

For the attic windows I needed a strip three inches for the window, plus quarter inch (two lots of one eighth) plus another quarter inch to allow some trimming later.  This gave me a width of three and a half inches.

The length of your blind is really determined by the fabric you are using.  In real life of course it needs to be longer than the drop from your blind rod to below the window.  Here, though, if your fabric is a bit bulky (and it is best that it isn't!) you won't want to roll a huge amount round your rod, so finding the best length is about trial error or good guessing.

My fabric was too thin for blinds so I cut strips twice the length I needed.  I folded them in half and ironed in a sharp crease.

To stop fraying I mixed 'Fraystop' 50:50 with water and pasted it generously on the inside of one half.  I am pretty sure Mod Podge or any PVA glue will do the same job - but do a small test piece first to make sure it doesn't affect your fabric in any way. 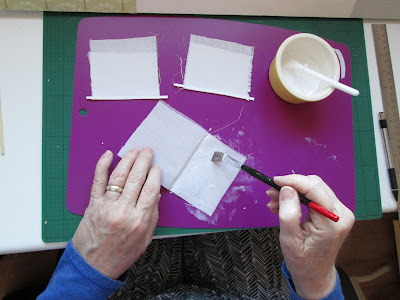 My real blinds have a wooden bar added in the hem at the bottom to give them weight.  I cut a one eighth strip of photographic paper (thin card would do) and pushed that tightly in place and folded over the dry side and carefully rubbed the whole thing down to remove any pockets of air.

Now here comes the hard part.....  leave them alone and let them dry completely. They will be as stiff as a board and no fraying when you cut them.

Next, they need to be squared up perfectly so they don't hang winky wonky.  I use my marked up with guide lines cutting board for this but you could use any right angle and ruler or even make a nice cardboard template exactly the right size. 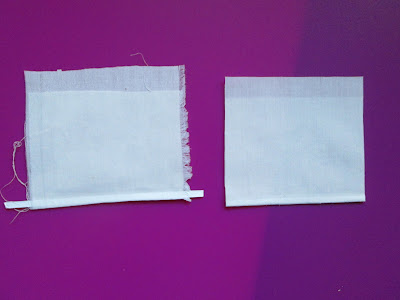 I am no way a fan of superglue for all sorts of reasons but sometimes it is the go to place.  Put a few dots of superglue along the top edge (I use a toothpick and squeeze small amounts of glue onto a glass tile for easy clear up and good control)

Place your rod carefully along this edge and hold in place until its fixed. 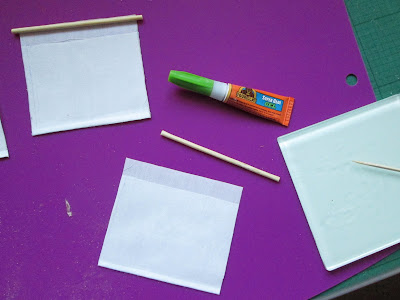 Roll the blind to where you want it to stop - this takes many flittings in and out of the windows to decide.  Put a few dots of superglue a bit behind the stopping place and roll your blind very tightly and hold in place until its set.

Making the brackets and assembly 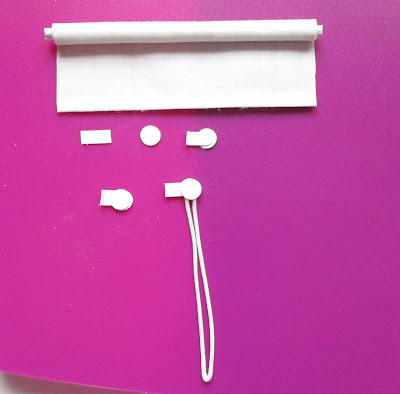 [I chose to use photographic paper because I wanted the outside elements of the fittings to be a bit shiny like the real ones.  I have a feeling I am just proving my 'madness' with everything I write....😊]

The bracket arm was stuck to the round end cap; again with superglue just for speed of assembly. (top right)

For the control end a piece of cord was glued in place and then the cap piece glued on top. (bottom right)  I took a long time finding a cord that was in scale and had some texture.

Bend a little of the bracket end at right angles to create the fixing part to the wall.

Fix each of these finished ends to the ends of the rods - superglue again and hold in place each time. 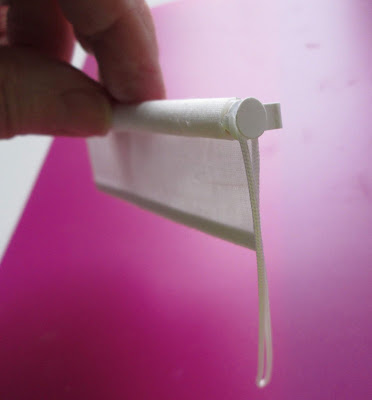 
Only the people reading this will understand the self-satisfied glow of being able to replace the attic flap for its very last time after having the attic rooms exposed and the sloping roof lying on the mansard for five months.  Happy day.  This is what minis do for me.

To prevent spam your comments come to me first. I will be as fast as I can to post them and reply. Please do leave a message.